← Are you Ready For Some FootBall!… It’s Soccer Week…
Just Dance Beyond Disgaea… October 8th Games! →

“Mamorukun Curse!” aka “Mamoru-kun wa Norowarete Shimatta!” when It was released in Japan and developed by G.Rev in 2008 was a Arcade SHMUP/CuteEmUp/BulletHell release.. Then in 2009 they decided to port it over to the 360… Then two years later a more advanced port was released for the PS3 in Japan.. Then silence…

At the beginning of 2013 a rumor started around…the game might be hitting state side.. Later on this was confirmed and released by UFO Interactive on July 16th on the PSN.

Mamorukun Curse! Had finally released in English! It was a long time coming, But was the long wait worth it? Would this make the bullet hell crazed people happy?

Some might be asking ” What is a bullet hell game?”.. Well it is a scrolling screen shooter, You use your left stick to fly around and your right stick to shoot.. Sounds easy.. Yes.. but it ramps up to carnage.. The enemy bullets go everywhere and you must dodge them or die..  Each SHMUP has its own special that it likes to include. MC special is.. well its curse.. You can hit a button and shoot out a circle spiral ofdeath that damages enemies or you can run into that makes your shot go insane for a few seconds.

MC has a anime, happy look to it.. Its not your normal in space or planes.. You play as people.. and you will kill some happy and some not so happy looking things in this game..

Mamorukun Curse! Also has characters.. has more then most.. Most modes you can select from Mamoru,Mayuno,Kinya,Beniko,Fululu,Luchino and Nowa. Each with different shot types and curse shots.

So lets talk about starting up the game now.

Netherworld Adventure is more of a Time Trial / Challenge run. It has 3 modes that start off as super easy to almost impossible. The three choices are Casual Course, Fululu Challenge and Nowa’s Challenge. After you select your course page, you select a challenge and your good to go with whatever character is selected. Netherorld Challenge basically gives you a 3 strike system. You die 3 times in your challenge.. It is game over and you will just have to retry the challenge.

The next mode is Arcade, In my opinion the funnest part of the game. You pick out your character and your off. This mode you can change your options and play on the easiest or the hardest. You go through stages, Clear them and pick what stage you want to go to next.. Do some stages in the correct order and trigger special events. This is the way I recommend anyone that is just starting out to play. It will teach you map layouts and enemy spots.  Also you can die all you want.. you can just keep going from the same spot you died from! 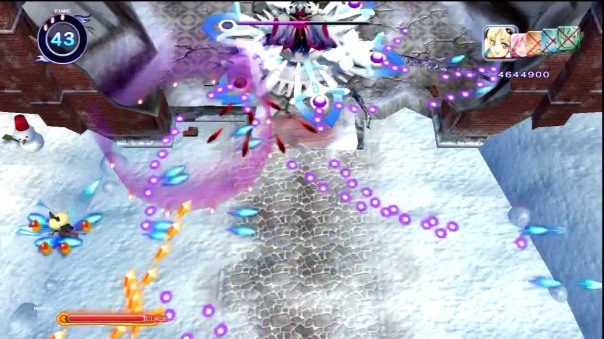 Story mode is well.. Story… You pick out a few characters and you hit the text for a minute.. Before you know it your back in the game. But be warned once all your characters die.. Its game over.. You will be able to restart from the stage you left off though.

And that is basically what the game offers. A large verity of characters and stages. That is what the people want! But does it work out?

Yes, Yes It does

I actually imported the Japanese Release a year or so back and Enjoyed it very much. At the time it was very import friendly. It did have one flaw… Lag.. Not engineered by the game.. But because of the blu-ray drive. All SHMUPS need a bit of lag at times to help you dodge bullets.. but the lag in the Japanese release was almost system lock up at times.

Happy to report that has been fixed in the US PSN release, Yes you have lag but the good lag.. The lag you need to survive!

The game also looks great for a 5 year old release and believe it or not.. Plays in 1080p… Screen choices of widescreen or original aspect with or without boarders is also included

Should you buy it?

I have been saying this for a long time.. This is a game that people need to pick up on.. BulletHell games are slowly disappearing and that is a shame.. MC is pure Fun.. and it doesn’t have to be only for the Hardcore fan.. This can be easily picked up by a first timer to enjoy and you should just really pick this up…

Disclaimer, I was provided with a review code for this game. I also liked it so much that I bought it on another account for a family member… Long Live Bullet Hell… Long Live!

← Are you Ready For Some FootBall!… It’s Soccer Week…
Just Dance Beyond Disgaea… October 8th Games! →