← Dezkly Presents.. “Lost Dimension” The Half Ass Review.. For the VITA!
Abyss Odyssey Extended Dream Edition – about a week ago play →

Phantom Breaker Battle Grounds Over Drive… The Short… HALF ASS REVIEW! for the PS4!

Guess what day it is… No.. Not Hump DAY! It is Friday! It is time for another Half Ass Review! Have you accepted Phantom Breaker in your heart as your beat em up savior?

Alright first off… I have reviewed this before on the Vita.. So… You can read that first if you do not remember.. A Link You can Click that will take you to that review you can read.. If you want..

But.. This is Phantom Breaker Battle Grounds Overdrive for the PlayStation 4. It has the word OverDrive in it… Is this some sort of sequel? Nope… this is just PBBG on the PS4 with a few improvements.. So… time is an arrangement…time is an arranger… i am a derangement?

So you know the drill.. If you just want to know if you should buy this game or not.. Go down to the opinion part in bold..  You lazy bastard..  We will wade in the tides of the summer… 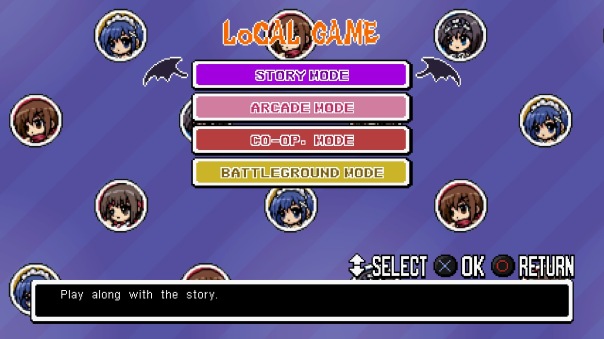 So what all exactly do you get in this new build for the almighty PS4 you ask? Well you have the choice of Local or Network play. From the path you pick you can Play Story, Arcade, Couch Co-OP and Battlegrounds mode. The network mode is about the same but just online..  Jump in a game with a random/friend or make a room for co-op story or battlegrounds mode for your online friends to jump in and play with you.

All the characters are here from the Vita and the DLC Character is avaliable also as.. DLC. And let me just say this.. Kurisu Makise is the best character in the game..  She’s my fave, undressing in the sun….Return to sea, bye, forgetting everyone.  You think about that… But yep.. a must for fans of Steins;Gate.  The character color sets are also brought over..

So.. What about lag… screen tearing?  Nope.. It actually runs smoothly and everything. Even when you have a million things splashing on the screen..  They even added more enemies and new routes.  It even looks pretty good in full HD… Where playing the vita release on the Vita TV was capped at 720p and had a few video issues. So I ask.. Are you looking for the mother lode? Because this seems to be the one.

Lets just do this.. The Opinion Part of the Review!

Phantom Breaker Battle Grounds Over Drive is a very solid release. It has been polished and really shines on the PS4. The couch co-op is the main seller for this version. If you have real friends that are around.. This is a must! If you already own the Vita release but do not have any friends to play with in real life because you alienated them… You might be better off with what you have.. Unless you like trophies.. Because this does have a separate list.. You trophy whore..  Also here is a sweet video.. Enjoy.. Then Buy Game? Hey.. I didn’t say fuck.. FUCK.. I just said Fuck..  GO BUY THAT FUCKING GAME MAN!

Phantom Breaker Battle Grounds Over Drive is out now for the PS4 on the PlayStation Store for 14.99

Developed and Published by 5pb./Mages

Disclaimer – The Nice PR at Strangely Compelling provide a review code.. That was nice of them.

And now.. a Quote that sums up everything? Enjoy

“Life has become immeasurably better since I have been forced to stop taking it seriously” Hunter S. Thompson

← Dezkly Presents.. “Lost Dimension” The Half Ass Review.. For the VITA!
Abyss Odyssey Extended Dream Edition – about a week ago play →