Have you heard the word.. That Phantom Breaker has finally released in North America! No not the original fighter… The brawler.. On Vita! 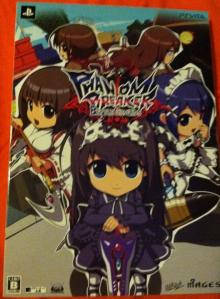 Are you ready for a quick History lesson? No.. Then you can just jump down to the next paragraph.. And if you just want to get my final verdict.. Just go to the bold at the bottom.. .Anyways… The original Phantom Breaker released in Japan in 2011 on the 360, People liked it.. and at one time… A Western release was planned but just never happened.. In return though Xbox Live got Battle Grounds in 2013 and the  Japanese Only Phantom Breaker Extra Hit the 360/PS3.. And it was a pretty bad ass fighting game.  In early 2014 Battle Grounds was released again.. But this time for the Vita.. In Japan.. but now the wait has ended and it has came to the west… 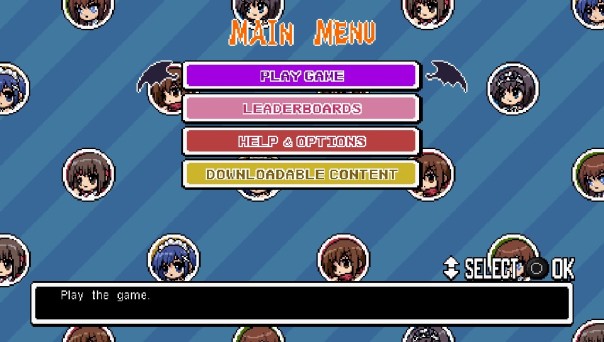 Phantom Breaker Battle Grounds.. a arcade title that was released last year on the 360.. Is a old school throwback of classic arcade side scrolling brawlers with a all female cast. The game starts out with several choices.. Story, Arcade, Co-op Story Via Online/Adhoc and Online Battle.  From whatever you pick, you will then have a choice of Four Base Fighters with more to be unlocked! Sweet lord.. That sounds PR-ish… Diane.. Lets start this all over again..

First thing first… The game has a How to guide in the Help & Options.. Read it.. It will pop a trophy! You Like Trophies! You LOVE THEM! After that you need to just play the damn game. Well you might want to go into options and select stick movement if your not into D Pad Action.. Ok now you can start the damn game! After you select what mode you want to play, character, character color and then a choice of two starting difficulties out of four.. Sometimes you can even stage select.. Then you get to start the game.

If you have selected Story, It is your standard story mode for a brawler, You go through stages and beat bosses. Eight stages are overall in the game with each stage taking maybe 15-20 minutes to complete. Each character has its own story line but the stages are kept the same.  Arcade is your time attack, get the most points type mode. All through the play through you are also leveling up your character with your gems that you collect during each stage. This unlocks points to unlock skills and to upgrade your character. This gives the game a bit deeper play value. 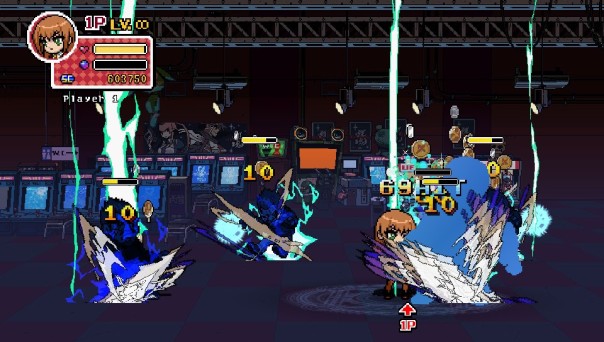 You know how most brawlers go, You move around,up and down… But this is different in BG… You have two tracks you fight on… by switching between L1. You have your high,low, block and other attacks. R2 will be your friend mostly. See that purple ball thing? The bar next to it will slowly fill up while fighting and collection points/items from your dead enemies.  Press R2 and your character will do a special attack and use some of the bar.. If the bar is flashing you can do a attack that damages all the baddies. This proves to be helpful to pull off big combos to build up more points. Also this is helpful when you are massed by enemies.. This will happen a lot in the last few stages where the difficulty is ramped up. 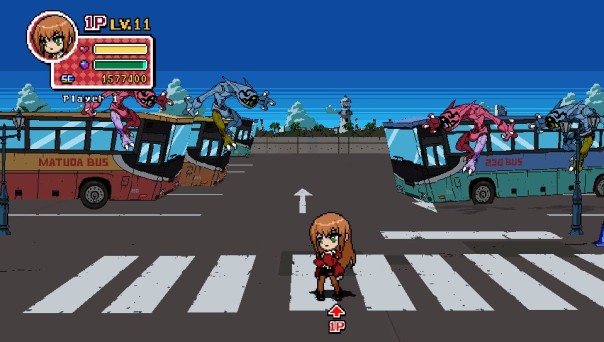 Difficulty is a funny thing is this game.. At times on Normal it will be smooth sailing but then you get to the boss and they just go crazy and destroy you. But if you continue and start the battle again… You will beat them like nothing.. Now the last few stages are not like this but I find it a bit strange.

The Japanese Release VS The North American Release

Fun Fact, I actually own the limited edition Japanese release of this game.. I played through on the Vita TV and overall enjoyed it.. It had a few flaws with slow downs. For playing on a TV instead of a handheld it looked pretty good. Overall I really liked it.

And now I have played the North American Release on my Vita… and I am really happy with it..

Honestly from what all I can tell.. They did not change much. The only things I have seen that is different is the English text in story mode and the slow downs are gone. Hell they even kept the button configurations the same…. 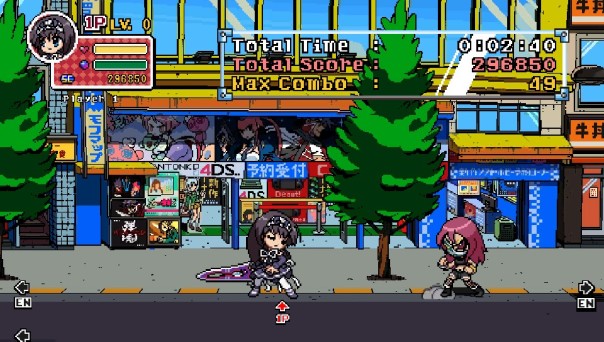 The Overall Review Part of the Review

Phantom Breaker BG Overall is Solid. The old school with chibi art-style works great. The chiptunes are solid. Replay value is respectable with leveling up, unlocking skills,difficulties and characters.

The game also has a day one DLC Addon for Kurisu Makise..You know.. She is from Steins;Gate… This might be the only flaw I see in this Release.. I really wish they would of bundled her in from the start. You can play as her in all modes, She has her own skill list to unlock.  And she cost $5.99.. This will scare off some people..  I really wish they could of just said ” $15 for a complete release”.

Back to the point, Battle Grounds is a sold as hell brawler and on the vita it makes it that much sweater. It is well worth the asking price of $11.99 and I highly recommend it.

Phantom Breaker Battle Grounds is out now on the Playstation Vita for $11.99

Disclaimer! The Nice PR People that work for 5pb provided a review code… That was really nice of them.