DooD! Disgaea 4 for the Vita!

Thousands of Years ago.. AKA 2003 the first Disgaea game hit Japan, Later on it spread and infected the entire Planet.. Except a few places that really do not have many gamers.. But you get my point… North Korea… Yep I said it.. Even though you know Kim loved those Prinnies.. 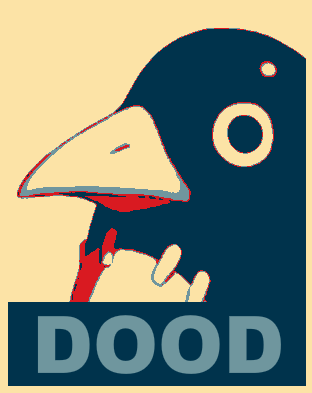 Hundreds of Years ago.. AKA 2011 the Almighty PlayStation 3 was graced with Disgaea 4!. With some mechanical and graphical improvements over Disgaea 3, the fans rejoiced! But now the time has come.. After Disgaea 3 getting a Vita Port.. We all knew what would come next.. and now it is here!

If you are reading this article you most likely already know everything about this game.. Hell you might have a Prinny on your desk or even wearing some sort of Prinny Fashion… No one rocks some Valvatorez fashion…  I see you.. Drinking from your cup.. Yes you! 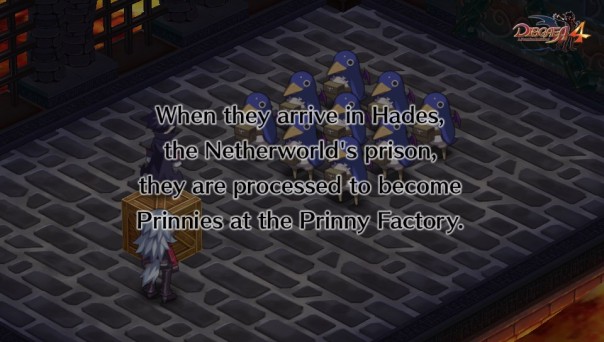 But for the people who don’t know about the Disgaea.. First off.. you need to start from the 1st.. Yes I said it.. I know I know ” But the originals don’t have trophies Z!” Like you would ever platinum 3,4 or D2… Fun Fact You can get over 15 platinum’s from those games If you wanted to drive yourself insane. Now if you just don’t want to listen.. Starting with Disgaea 3 or Disgaea 4 is fine also..  It is all up to you.. No peer pressure.. No peer Pressure!

Disgaea 4 is a SRPG, What is a SRPG you ask? Well you are on the internet but it is a Strategy Role Playing Game… Not a run around.. Hack and slash on a large map RPG that most of you new school gamers are use to.. This is putting your people on a grid, moving, using items attacking, more options and ending your turn.. Old school game play here.. 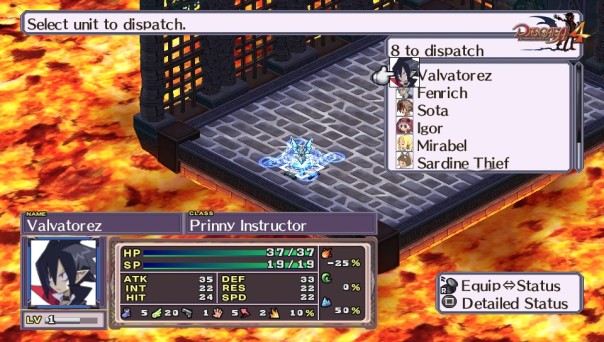 You start off with a simple cast of characters that have been in past Disgaea Releases. Fenrich, a bunch of Prinnies and your favorite Sardine eating vampire… Valvatorez.. The cast and crew just explodes soon after only a few minutes of game play. The game store centers around.. Monsters.. You are in hell.. Well you are playing as a Vampire mostly that gets in situations and trains Prennies to use in battle.

Before you know your training starts and literally the first Chapter/Part of the game is just training.. This is good for first timers and for those people that are a bit rusty.. But be warned.. When things get ramped up in this game.. They ramp up and will not go easy on you.. Saving is your friend.. Use it… 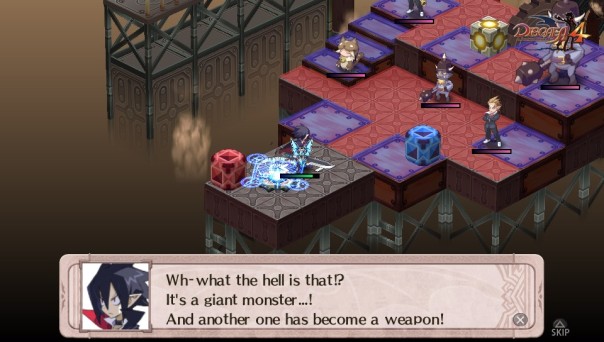 Most of the game play is about the same as past releases. They did add a few new tools to crush your enemy! You can now Pickup multiple team mates and make a attack tower. You can also do Fusion! Yes certain type characters can be fused to become weapons. If you have two of the same type you can fuse those to make one giant. But this all comes at a cost of turn limit.. 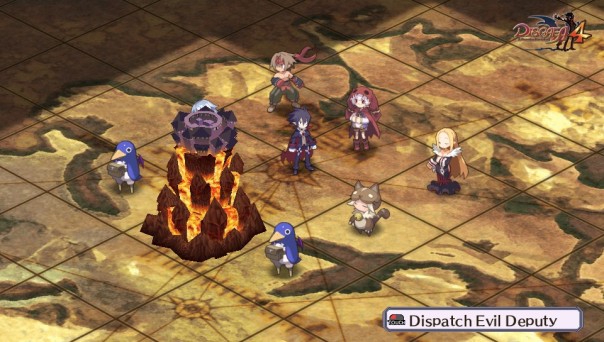 Hades is still around and you can also try to take over a map for more space. Classrooms have been replaced by the Senate.. It works the same way though.. You can bribe to get the vote you want. You can also create new characters from different classes. 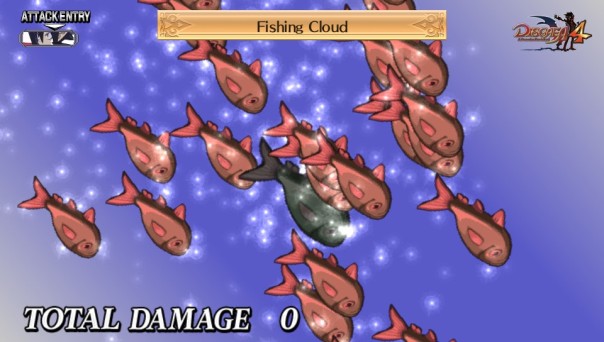 So you played this on the PS3… Why should you pick this up for the Vita? Well to me Disgaea has always worked better as a handheld game.. This is a game you can easily spend 50 hours in.. It is a grind fest and grind fest always work out way better on a handheld.

Disgaea 4 Looks great on the Vita also.. Graphics are smooth and has very little slow down. The colors pop and they did a wonderful job of porting it over. They also added a few spots that use the touch screen functions but mostly you will just be using buttons only. Overall they did add a bunch of stuff that was introduced in D2 in this release.. Like the Cheat Shop and a other surprises.

For you people that only play games in Dub, The vita release includes the English DUB and original Japanese track. I know some people are picky and this can be a deal breaker with or without dub/original audio.. You can also get two bonus start out characters if you have a Disgaea 3 save on your vita.. 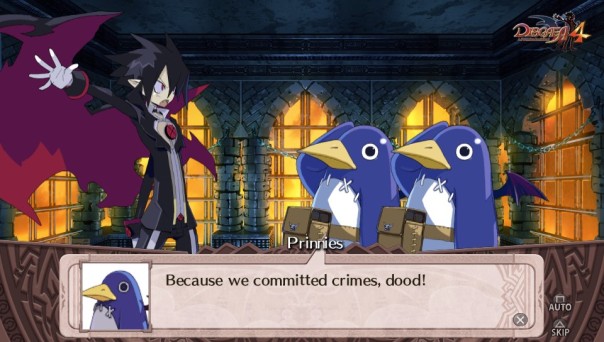 So What do I suggest? Well If you are a fan of Disgaea this is a must. If you are new to the series, This is not a bad starting place.. You will always get your money worth from the amount of game play and content these games have. I do wish this would of released a month earlier during the gaming drought of July. Yes people go on vacation during July and this could of been a car/bus/flight time killer.. Overall Check it out when it releases August 12th!

Disgaea 4 Developed By NIS and Published by NISAmerica. Releases August 12th on the PlayStation Vita in North America for $39.99 Retail and Digital.

If you are interested in a Limited Edition, NiSA store still has a few in stock.. But be quick.. Once they run out.. that is it..

Disclaimer, The nice people at NISAmerica was nice enough to give me a review code.. It was nice of them.

Posted on August 11, 2014, in Blah Blah Blah!. Bookmark the permalink. Leave a comment.