← Mini Reveiws of what I played March 31st to April 28th?
Raiden IV Overkill.. THE REVIEW! →

Do you like the dark? Do you like playing as a Female? Do you like glow sticks? Do you like to run? No I am not talking about Tomb Raider.. This is Daylight! I played it on the PS4 and this is The Review!Daylight a survival horror game developed by Zombie studios.. You know those guys that made Spec Ops, Blacklight and Saw.. Like to introduce you into a world of horror.. But did they pull it off? 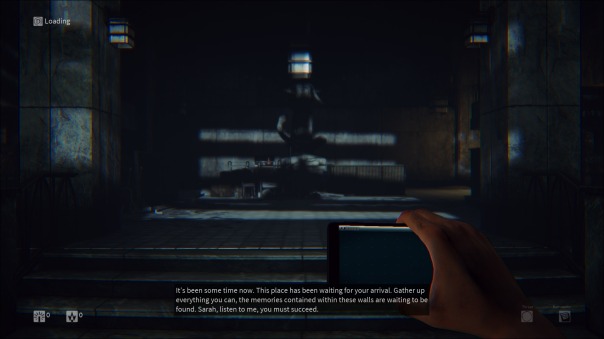 You play as Sarah,  who just wakes up in a dump of a build.. Crazy line drawings all over her arm and a cell phone in her hand.  First off.. This lady is going to have to get checked out once she gets out.. because I have heard of this stuff happening before..  But lets get back! You are awaken by a voice.. That sounds kinda like Dr Bishop from Fringe… He wants to you gather up everything you can and succeed… Because we got to go back Kate.. 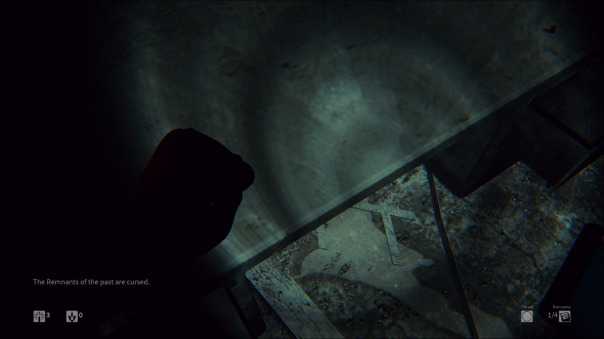 So you find some glow sticks and your on your way… Emt Emt Emt Sombody Scream! No.. sorry.. this is no rave.. This is a abandoned haunted building that you got to figure how the hell your going to get out of.  So what do you do… You collect up the cursed Remnants.. Because collecting up cursed items should solve all the problems… 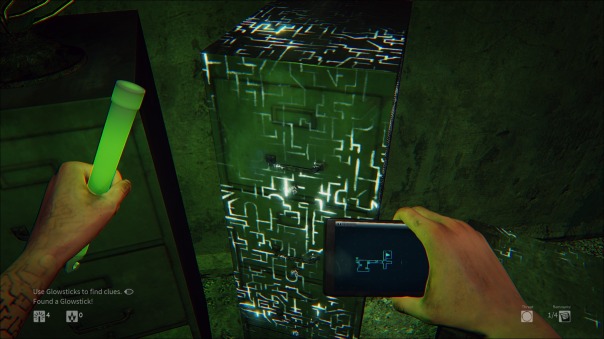 But not all is lost, No fear here! Your phone is a mini map and your flash light.. And it doesn’t really die.. So you have a good light source.. First off.. If I used my flash light on my phone for more then 10 minutes the damn thing would be dead.. Iphones have horrible battery life.. I guess she has a android.. The “poor people phone” that a ABC Study found in New York City.  You will have to google up that info.. But yep.. That is what they called it..

Shake a glow stick up and watch things glow. Items you can interact with will glow with a weird labyrinth design. You can also see your foot prints so you can tell if your back tracking or not.. Even though you can just keep a eye on your map.. 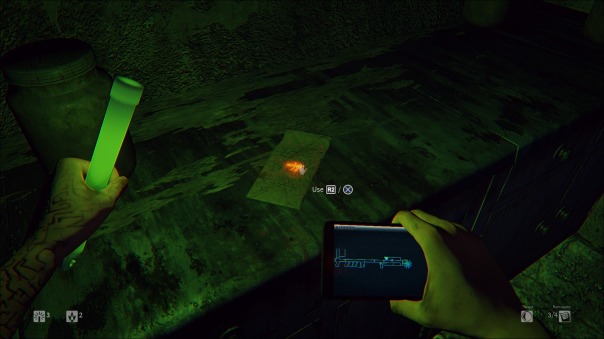 Your goal is to find the remnants/notes.. Each one gives you a bit of history of what happened in the past. Now you can be lazy and just collect what is required or you can be a hunter and try to find them all.. But from what I can tell.. The more of these you find.. the more weird shit will happen… 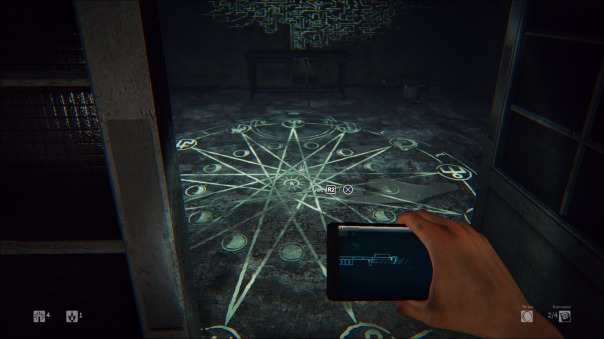 Once you find them or even before.. You will come across a room that is like this.. Weird Labyrinths on the wall and all.. Yeah this looks like a good room to step into..  This is where you want to take your remnants.. Once you have them all you will see stuff floating around.. and a item that you need to grab.. It becomes your key to getting the hell out.. 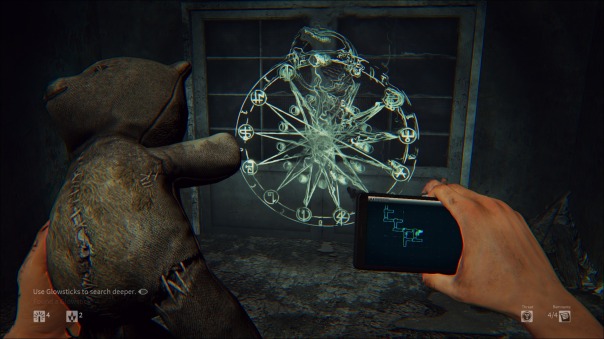 Once you have your key item.. Be prepared to see some quick freaky stuff.. Like transporting and seeing things.. Best thing to do.. Just run.. Run until you see a symbol like above.. Walk up.. and it takes your key and will now open a door… Pray for freedom..  It is all you can do.. But you are not free yet.. Oh no.. ‘Bout to turn it up to eleven.

You see.. During your time of seeing things.. So far.. you get a glimpse of the Witch.. She flashes before your eyes but that is about it.. But after you pull that little stunt and kinda chase after her.. She decides.. You are going to die… 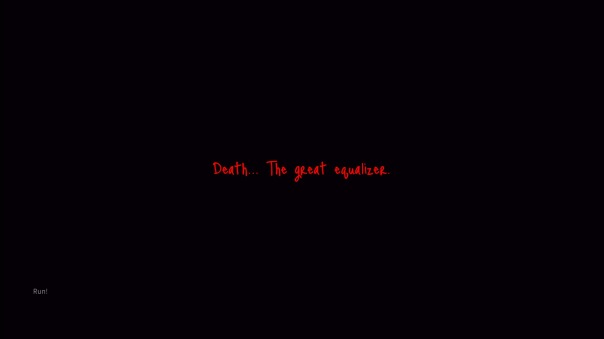 I wont get into much of a spoiler.. but this is the game in a nutshell.. Collect and Run.. Because when the witch comes.. She comes for the kill and sometimes it only takes a second and you are dead.. But i know what you are thinking.. ” Has to be some way to kill or stop her..”??  Well you do have flares and the witch is not fond of flares at all.. Or you can toss a glow stick to distract her so you can run away. Other then that.. Your screwed. Or you can watch your screen on the right. It will actually notify you how close a witch is.. the more full.. the closer to death you will be.. 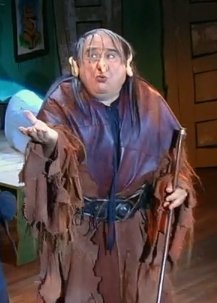 I couldn’t get a picture of the witch.. But that picture is close to it.. Scary stuff man.. Scary Stuff

The Review part of the Review

Alright, I will give Zombie Studios props.. They built a game with a ton of atmosphere. The level design just screams creepiness.  Even though at times I found myself in a few rooms that look like something from Bioshock.. The sound is also, It keeps your heart pumping and this is what you want in a survival horror game. Believe it or not.. I actually like the opening Theme music.. Reminded me of Deadly Premonition in away..  But with all positives.. Comes negatives..

Frame rate right out of the gate became a bit choppy at times. I really only experienced this the worst in the first 10 minutes of play and then it cleared up a bit.  I do not know if this is a problem with only the PS4 release but I am sure this will be patched sooner or later.

Small text syndrome.. This game has it..as you can see in my screen shots.. I understand why and how this happens but I have never been a fan.. and I wish some option was included to make the text a bit bigger.. Easier on the Eyes for us gamers that like to play on a couch and not a foot a way from the screen.

The procedurally generated levels… I am not so sure about this.. When I was in the prison I would run into the witch constantly and die.. Well it would just start you over in a new map.. Yep you have to collect your items again in a unknown area. But i found after awhile I would die and it would load me back to a map I had been to before.. So I could run it quick.. Now I am not sure if the notes were in the same place as before but almost everything else was..

Now I will talk about the alternative ways to play..

“What about remote play”.. Well it works.. They did not do any special control switches for the when it is played on the vita.. Some other games have done this but they did not.. So you will be holding on the back of your vita to run and this gets a bit tiresome at times. Still solid and playable though.

Daylight is a survival horror game that takes a step away from releases like “Outlast”. Some parts are part of the plan but most are just random and it makes it different. It has it scares but it has a lot of build up. It is not a game like “Outlast” that you can watch someone else play and go ” Well that was scary but when I go through.. I will know what to do”.  You can think that in Daylight but you will be wrong because that Witch will pop out of anywhere.. And it sucks if you die.. It really does.

Daylight is a solid game, a few hiccups but I would say.. Give it a try if your a Survival Horror fan. I wont say it is the best game ever in the genre but it is worth at least trying and for the price it is chump change compared to what some of you guys have paid full price for..  It is a game built to be replayed.  Will I replay.. HELL NO.. I am Paranoid to begin with.. I do not need anymore chest pains and panic attacks..

Also it is on sale right now on the PSN for under $10 with plus.. Now if you read this a month after I posted it.. Its not anymore.. you will have to pay that extra chance..  But do not say I did not warn you.. I tried to tell you.. But you didn’t believe me.. WHY DIDN’T YOU BELIEVE ME!

Daylight – Developed by Zombie Studios and Published by Atlus

Want to purchase it on the PSN for your PS4? Here is your link

Disclaimer – The Nice PR at Atlus provided me a code for this nice game.. Now my PS4 is haunted… Nice of them?

Your still here.. Review is over.. What are you reading? I guess since you are still here…

Hello Dave.. Would you like to buy some pegs Dave?

← Mini Reveiws of what I played March 31st to April 28th?
Raiden IV Overkill.. THE REVIEW! →