← What All New Games I played in April.. With my opinons?
Nom Nom Galaxy.. THE REVIEW! →

So many of you know.. might not know..  Last year Neptune U released on the Vita in Japan. Well in less then two weeks it will release here in the States and then in the EU Region. You didn’t? You have no clue about this game? Well here is your PSA! Well.. First some opinion stuff.. then PSA stuff.. Go to bold if you just want the PSA Stuff..

So last year this released in Japan. As usual.. I got my copy around release and I must say.. I fuckin Loved it. I went online and told people this was the best Neptune/Neptunia game… a few months later Idea Factory International announced that it would be released in the spring for the west.  Now that time is almost here. I recently got a hold of the English release.. and Surprise Surprise.. Well..

I played the shit out of it.. Like put 10 hours in the first 24 hours of having the game..  So now you might be thinking ” Wait… You played the hell out of that game… That never happens.. You must like it.. But why?”…… Well because it is way different then past releases..

Hyperdimension Neptunia U Action Unleashes for the Vita is a action hack n slash. Think on the lines of Senran Kagura Shinovi Versus but with less nudity. Yes I said less nudity.. Actually this Neptunia is a lot tamer then any of the others. Yes clothes can be ripped off once but that is about it.. Most of these Neptune games have several perverted/fan-service scenes… but not much in this one.. So it is clean for the kids to play!

See.. That is kids friendly.. So you can play this on a PlayStation TV for the entire family to watch.. Yes this is PSTV compatible.  But lets get back to the fun stuff.. The game is set up somewhat like past releases. It has a story and it has skits that play-out through the game. Some things from past games is missing.. Like the shop..  So now you are thinking ” How the hell do you get new items?”.. Well when you kill/clash.. Sometimes they will drop a medal. Each creature/monster/gamethingy has its own medal. You collect these and unlock new weapons and stat upgrades. Some start off at 50 medals to 700. The nice thing is.. Medals are not removed when you unlock something. Some sets you will max out at 999 quickly.. Some.. Not so much. Wait.. I just jumped over the character select and other things.. 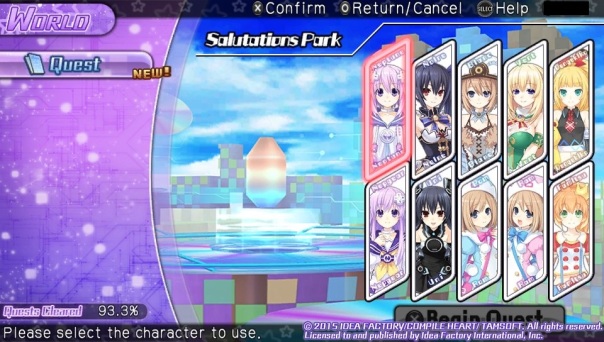 The story mode usually lets you pick from 10 characters. Some missions are for certain characters only. This also includes two new characters that represent two famous gaming magazines from Japan.. You won’t get it… Each character also has a HDD version that you can trigger when you build up the EXE bar halfway. Everything in the game is a Quest.. But it is mostly “Defeat this” or “collect this”.

So you go in.. and instead of having turns like all the other releases.. You just go around and combo the shit out of everything by spamming square and triangle. You clash and get medals. Enemy’s re-spawn on the screen and surround you quick and you feel like a bad ass when you rack up a 999 combo on the screen that just keeps going and going.. Then you max out that Damage… You will just go…damn… and before you know it.. You have leveled up to be the best goddess you can be..

I would love to talk about the game more.. But sadly I can not. But I can leave a few tidbits.. I beat the main story line in around 10 hours with plenty of quest still around to do. You also unlock two other modes and something else that I can not talk about after you beat the main story. But beware.. You will grind in one of the other modes.. So don’t grind so much in the story..

PSA! Alright the point of this post.. I really really like this game and I wanted to give the heads up that it will be launching on the 19th of this month for North America and on the 22nd for Europe.  You can pre-order and purchase it at most of the usual places.. You can buy it digital.. It only takes a gig and a half.. Or you can lock in and get this mother fucker… 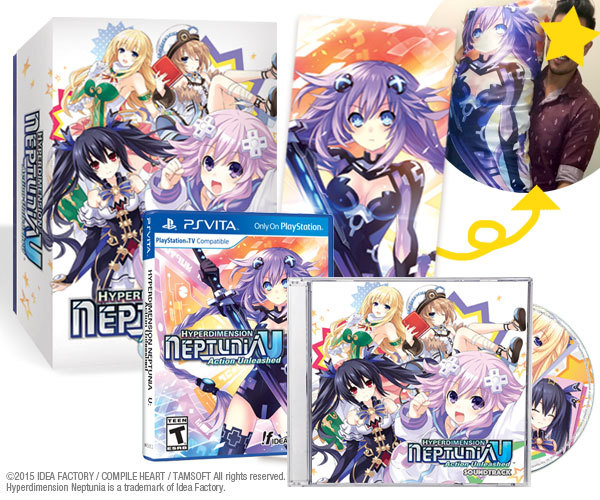 At http://www.iffysonlinestore.com/neptunia-u-limited-edition/ … Yes I put the full link to see because that is the best way… The Iffy Store has a Limited edition for $57.99.. Game, Soundtrack, box and body pillow.. Yes.. a god damn Body Pillow… 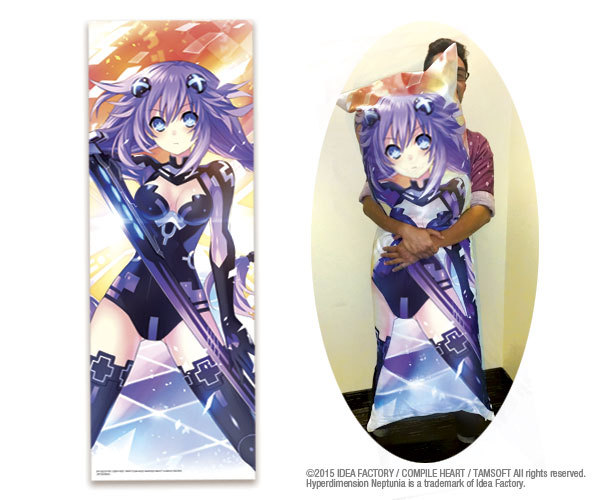 Well it is a body pillow cover, You can purchase a body pillow for it from Amazon or some local store for local people..  I know you want to sleep with Nep..  Hell you might already have one of her half nude on your bed right now.  But this is a legit one.. and you should get this game for your vita.. Hell you can use this while playing the vita or something.. Or you can do whatever you want to do with it.. You sicko.. But that is your money.. Just remember to clean it once in awhile.. Or buy two sets.. That way you can switch back and forth..

And this has been the Neptunia PSA!

Hyperdimension Neptunia U: Action Unleashed  releases on the 19th for NA and 22nd for EU.

Disclaimer! The fine folks at IF International provide a code for review. This is not a paid advertisement.. Hell I am not even going back to spell check this bastard..  I just really like this game.. It is the best in the series to me.. and I have the PS4 game.. Cant wait until the sequel drops later this year…  Will I have a full review? I think you already know what it would say.. BUY THIS FUCKING GAME MAN! but that is just my opinion… man

← What All New Games I played in April.. With my opinons?
Nom Nom Galaxy.. THE REVIEW! →