← The Update/Something Different? OSU! for PC!
Monster Monpiece – THE REVIEW! →

Are you ready? Are you ready to read about what I think about PP? Can you handle PP? Did I Enjoy PP on my Vita?? All this and more will be answered on the next NEPTUNE BALL PP! Wait.. Just keep nep-nep…

Hyperdimension Neptunia Producing Perfection.. aka Neptune/Neptunia PP for the PlayStation Vita Is the latest release in the world of Neptunia!… Well in English.. Not in Japanese.. They have several games after this one.. but..  It has everything, Action, Ghost, Girls that look underage but they are not because it is a video game but you think it is perverted anyways, People who don’t own pets and a club that plays only five song but everyone is on speed so they never notice.

Neptunia PP is a first in many ways, If you have been following the series you should know that Neptunia has been around for a few years. A popular JRPG series that has a bit of a cult following to it.  The adventures of Neptune,Noire,Blanc and Vert have been told in several games. The world of videogames in a videogame… Known for references that span generations.  So what is different in PP? Well first off you need to read the picture above.. This game is not canon. This is a important fact of the game.. They remind you several times..  Lets just keep going..

So the girls economy is going downhill.. They are not getting the respect like they did in the past.. So what do they decide to do. NO THEY DON’T BECOME STRIPPERS!  They decide if they dance and sing.. It would make the world a better place.. So they kidnap your ass and force you to be a Producer.. Since you know.. Your great at this since you play video games… You just had to buy that latest and greatest game today.. Oh yea… You have 180 days to get the job done or I am sure Noire will mess you up… 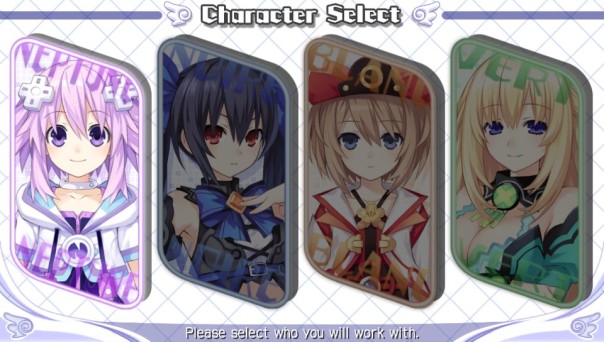 And this my friend.. Is the plot line of the game.  They are forcing you to point them in the right direction to become the best Idol. So pick your girl to start with and go on a adventure of press events, training, dress up and trying to give people in the audience a seizure with JPOP.  SOMEBODY SCREAM!  I had a really funny joke to put here on Friday when I first started to write this all up.. But now it is Monday and I have forgotten it.. That is how it goes sometimes. Back to the review?

So lets go back to the ” After you pick your girl part”… So you pick a girl.. and after a wall of text that you will need to read because this is a game where you have to read in.. I know.. I know what you are thinking.. ” I have to read in this game? Why Can’t I hack and slash and go on quest?”. Well my answer to that is.. You are playing a Idol game… Is it simple enough for you? Does everybody understand? Are you all still following me? 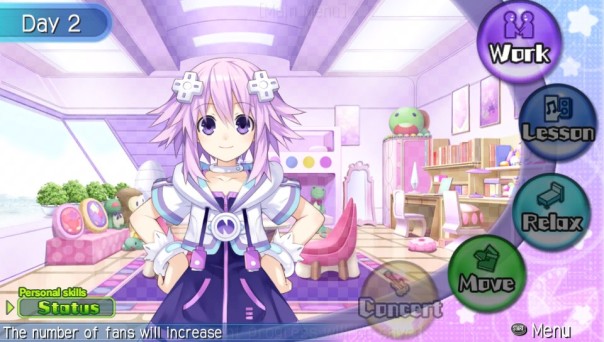 Once you finally get into your home base menu.. See example above… You have a few things to pick from the start. You can Work.. That is PR for your idol with task that build up her trust and knowledge while at the same time bringing up a fan base. Lesson is obvious.. Improve Vocals, Rhythm, Expresion and Knowledge. Or you can Relax, To reduce stress or build relations with the other girls or the producer. But be warned you can only do one thing a day.. So chose wisely. Also when It says something takes X amount of Days.. That means if you use it.. It will take X amount of days to show back up.. Again everything is only a Day use.

And this is your Status screen.. I got this screen shot at a funny time.. No Stats to be seen but it gives you a idea of what you have to work with. Build up the relationship with your idol and you will get a small boost in stats at times. Keep your stress down and you will most likely complete events successfully with a higher point jump. It also tells you a % of Event Completion you have.. This is more for the people who want to get the perfect ending.

So you do a few training and PR stints.. You build up your stats a bit.. You build up your Guts… and you will be able to pull off a Concert! You start off with a single song, a stage and some effect. You can also dress your idol with random clothes that unlock while playing the game.. Same for everything else.. They just don’t say ” Here you can everything at one!”… You have to unlock dammit…

Once you get in, You control the show. You control the camera! You control the effects! But why do you ask? Well you are the producer.. You see each effect gives a boost to your fans that in-return becomes a score. They all have a  % boost and a cool down time.. Build up the meter to max and you can turn into your HDD mode to gain more fans/points. Once it is all over you get a semi grade of how it went down and your off again trying to build improve your stats. You will also see a weekly/monthly report of your song on the charts.. Your goal is to get it to number 1 and then get yourself to number ONE IDOL in the world! 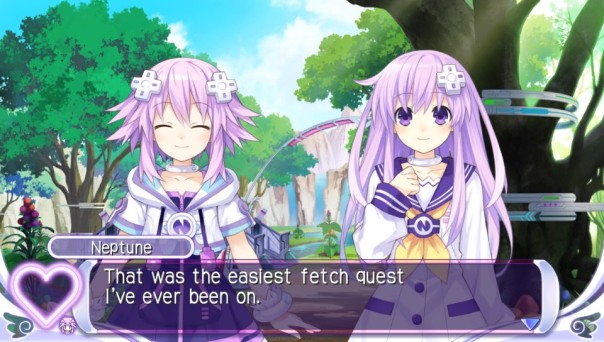 And that is pretty much it.. Become the greatest Idol! It is a long path alone.. So what do you do… Become friends with the others and make a group! But only up to three at once… Only a Trio… Once you do this.. Improve your stats.. You will be the number one Idol in no time.. Seriously.. It is that easy…  It is Jitterbug Easy.. and once you complete this you can start over again with your stats and do the next girl.. DO THEM ALL!

From the main menu.. If you just want to direct them in a song you have Unlimited Concert available..  No stress, Just pick a song, layout, effects and watch them sing and dance..

You also have a viewer mode that you can use as a alarm clock or just pick a character and see in 3D..

You can also play this in Japanese voices if your all against the Funny/Great English voice work.. You sicko..

The opinion Part of the review?

Alright.. This was not my first Rodeo with Neptunia PP.. Come on guys.. You know me.. Why wouldn’t I play this in Japanese when it first came out.. Eh.. You guys.. When I played the Japanese release I was super disappointed. This was mostly my fault but It lacked some things that I thought would be in a Idol game at the time.. I had played others and just expected so much more. The problem was just how basic the game was. You just select a event and go.. No mini game that you can screw up on.. a Limited track selection of 5 songs..

But lets get back to the English release. I enjoyed this so much more. Yes it is the same as the Japanese release but what really shines in the humor. The references that pop up and oddball jokes that come from no where.  Now I believe most of these were westernized during translation and was not in the Japanese release. The game has humor and that alone is worth the play to me.

But going back to the game play.. I like to call this ” Baby First Idol game”. This is really the first English released Idol game to hit a console in English.. I don’t could IOS/Android.. Like I have said before it is basic and really simple. They easily force you to read several picture guides before you really start into anything. The only part that is a bit weird is the concert but after a play or so you get it down to what you need to do to improve your meter.. That is by using the right effects together with the rhythm and also using the correct song/stages with your Idol.

I just wish a little more user interaction would of been included in the training/pr parts. Most idol games throw in rhythm timing games to improve your skill.. In this you might get lucky to be asked a question to answer.. Or run into a scenario that needs to be cleared up by a simple decision.

The Final Part of the Review?

Overall I suggest the game if you are curious to try out a Idol game.. Like I said before.. it is basic but also a first. Fans of the series will appreciate the humor and at the same time It is easy for a newcomer to join in as-well. The game is kinda like my reviews in a way.. It is a bit basic.. but bat shit crazy.. you keep telling yourself that you will stop but before you know it…you are at the end and ready to go again.. Yep I think that sums it all up.. Wait.. was this the joke I wanted to make Friday… Ohhhhh…

Positives – Humor, Bat Shit Crazy, Idol Game, Easy to pickup, Girls from a series that you should know by now, Takes use of the Vita Touch screen

Negatives – Basic in the Idol Game world for people who have played these types of games for a long time.., 5 Songs only

Hyperdimension Neptunia PP releases on June 3rd for the PlayStation Vita for $39.99 retail and digital

← The Update/Something Different? OSU! for PC!
Monster Monpiece – THE REVIEW! →